Cooking up laughs in the kitchen 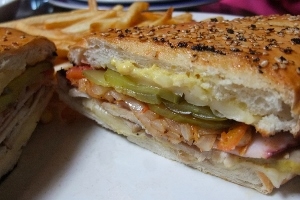 They say that money makes the world go round, but food is certainly a strong contender. Jon Favreau's latest film, Chef, is light comedy fare but speaks from the heart about gastronomy and the relationships it forges. Favreau stars as Carl Casper, a head chef in Los Angeles who compromises his culinary passion in order to appease his boss (Dustin Hoffman) but is forced to quit his chic restaurant. When a video rant against an important food critic (Oliver Platt)goes viral, Carl returns to his roots along with fellow chef Martin (a charming John Leguizamo) by trekking across various states inside a food truck where they serve delectable Cuban sandwiches and other comfort foods. Along the way, we are introduced to Carl's ex-wife, Inez (Sofía Vergara),who encourages him to spend quality time with their son, Percy (newcomer Emjay Anthony).The boy helps his father's business by posting multimedia messages about their culinary adventures. Favreau's smooth editing depicts live Twitter and Facebook feeds, which also touches on the power of today's hi-tech world that can either make or break a person's career. As a result, Carl and his son grow closer despite his past absence as a divorced, hardworking father. The fun music soundtrack is filled with African-Latino stylized versions of such familiar classics as "Sexual Healing," "Oye Como Va" and "I Like It Like That."Favreau's screenplay also offers cameos by Robert Downey Jr., Bobby Cannavale, and Scarlett Johansson. To the same man who brought us the unique comedies Swingers and Elf: well done and bon appétit!