Caves a Halfway House for Groups 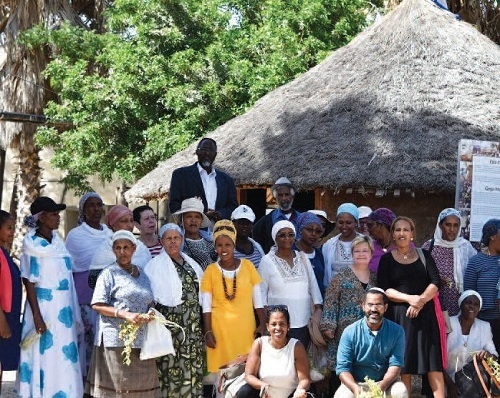 The group outside the Gojo house at the Atachlit Ethiopian Farm

Story by By Adele Rubin and Nina Zuck

A few years ago, the Ethiopian Sewing-Circle in Sderot spent a wonderful day in Netanya, visiting the ESRA sewing-centers there.

It was such a success that we made another joint outing for the two groups. This time we met half- way for a visit to the Bet Guvrin caves. It was wonderful to see the meeting between the two groups who have a language in common! One of Sderot's newer members knew some of the Netanya members, from her days at the Beerotayim caravan-site.

Despite the chamsin, the older women climbed up and down the caves in Bet Guvrin. They were great and we had an interesting morning there. The Bell cave is stunning and impressed all.

We then visited the Atachlit farm near Kiryat Gat, which was an eye-opener. This is a community project to help Ethiopian immigrants integrate into Israel, while retaining their cultural heritage. "Atachlit" means "agriculture" in Amharit. It was really fun to see the Ethiopian women beating the piles of straw with great enthusiasm to remove the barley seeds. The farm is set up as a village in Ethiopia, and the women were so excited to walk into the mud huts and reminisce. It also has several workshops in pottery, mud-building and Ethiopian script and it is really worth a day's outing to see the farm.

Everybody enjoyed the Ethiopian buffet- lunch of injira, dabu and spicy sauces, beautifully set out in the clubroom. Then we heard about the new herb production business, especially of "teff", which is not available here, (evidently, when the immigrants came, the absence of this familiar food, made their integration more difficult).

After that, the Sderot and Netanya groups parted company, with Netanya going on to see the Memorial to the Ethiopians who fell during the march through Sudan.

Hot as the day was, the participants had a wonderful time, absorbing more of Israel's history and remembering some of their own.