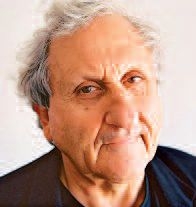 Author A. B. Yehoshua

A packed hall greeted the award-winning Israeli writer, AB Yehoshua when he came to speak to ESRA in Kfar Shmaryahu in October.

He was introduced and welcomed by Adele Hunter whose friendship with Bulli, as he is affectionately known, goes back some forty years.

He spoke to an enraptured audience about his latest book The Retrospective. He stated that the profession of the protagonist is always of great importance in his books and something he researches in detail, as he feels this gives the reader background and insight into the character.

This is the story of an elderly Israeli film director, Yair Moses, who is visiting Spain where a retrospective of his work has been planned. He is accompanied by his close friend and erstwhile lover, the leading lady of most of his films, Ruth, who is no longer as beautiful as she was, but still attractive, certainly to Moses.

The book looks at the relationships of the people involved in the early years of their film-making, particularly that of Moses and his screenwriter, Trigano. This partnership came to an abrupt end when one of Trigano's suggestions for action in the film was turned down by Ruth as being outrageous and unacceptable, and her view was supported by the director.

This break-up haunts Yair Moses throughout the book.

Vera Freudmann was asked to read a couple of passages from the book, bringing them to life in her beautiful British-accented English.

The audience was invited to ask questions and there were many, deftly handled by Adele.

A stimulating evening was brought to a close with an appropriate vote of thanks by ESRA Chairperson, Brenda Katten. When's the next book, Bulli?