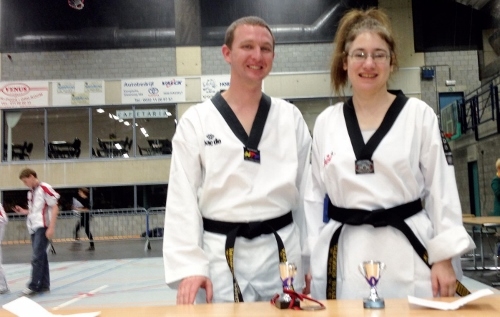 Jessica Mandel, pictured with Benjamin Fogel, one of her star Tae Kwon Do pupils, have both brought home medals and acted as referees

In the past six months, Tae Kwon Do teacher and practitioner Jessica Mandel has represented Israel in five European competitions, from which she and her pupils have brought back three medals and two trophies. These join the scores of trophies, honors, certificates and other accolades that she has accumulated in her career as a martial arts international referee and practitioner.

"Every time I take my students abroad to compete, they bring home medals," says Jessica, proudly. "One of my students, South-African born Benjamin Fogel, has not only brought home a bronze medal from Belgium, but also acted as a referee in that competition. He and I are, so far, the only Israeli referees authorized to referee in international competitions."

American born Jessica, who came to Israel as a teenager, is an unusual woman. She has distinguished herself in the largely male world of Tae Kwon Do, in which she holds the rank of Dan 6 - this makes her a Grand Master, the highest-ranked woman in Israel and one of the four highest ranked in Europe. Both as a participant and as an international referee, she has represented Israel at meets, seminars and competitions in the E.U., Asia, and the Near and Far East.

At home in Israel, she runs two martial arts studios, one in Raanana and one in Tel Aviv, in which she emphasizes flexibility, strength, cooperation and discipline. "The first and most important things," she says, "are self-confidence and self-defense," the values which originally attracted her to Tae Kwon Do. "The second most important thing," she emphasizes, "is the value of tolerance, sorely needed in our society."

Over the years, Jessica has attracted an international clientele, boys and girls, teens, men and women, ranging in age from 6 to 65 years, all of whom she teaches in English, which has become the common language of this Korean art and which allows them to communicate with fellow sportspeople all over the world. Multilingual herself, and diabetic from the age of six, she teaches people of all cultures, ages and physical conditions to achieve strong, self-confident bodies and outlooks and in the process, to make friends and have fun.

Jessica also teaches English and has enabled scores of students to be defined as 'native speakers' in their schools, to pass the Bagrut (matriculation examination) with high scores, and to be accepted into prestigious universities at home and abroad.

"Israel is part of the larger world," she says, "and we must make a good impression when we interact with it. We are looking forward to hosting the first ever International Technical Tae Kwon Do competition to be held in Israel, tentatively set for October 2013. We invite Europeans and Israelis to join us."