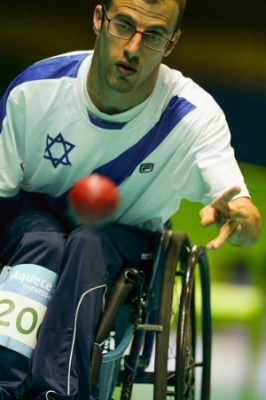 The thought of lawn bowls conjures up the sedate sound of wood clonking on wood, a tea-house serving scones abutting the manicured green, and polite people dressed in white throwing the balls. But precision ball sports such as bowls and petanque can be fiercely competitive, and the same goes for boccia, a variation of bowls for athletes with severe physical disabilities affecting motor skills, mostly Cerebral Palsy and Multiple Sclerosis. In 1984 Boccia became a Paralympics sport and by 2008 was played in fifty countries … but Israel was not one of them. Israeli athletes competing in the 2008 Beijing Paralympics discovered the sport, and decided to introduce it back at home.

"That's when I got a call from Ilan, the Sports Center for the disabled in Ramat Gan," recalls Nadav Levi, Israel's Boccia champion, "asking me if I was interested in helping to start training a team. We came to the first practice not even knowing what the court looked like, or how many people play on a side. Our coach soon left us, and I had to contact experts abroad for advice and help. But quite soon we understood what needed to be done."

Six years down the line, Levi knows that the wheelchair sport is played by individuals, pairs or teams of three on a court measuring 12.5 x 6 meters. The surface is flat and smooth, and the players (men and women, the sport is mixed gender) throw leather balls as close as possible to a white target ball called a jack. The balls can be moved with hands or feet, or, if the disability is severe, with an assistive device. And not only is Levi today a player and a coach of his team, he is also ranked number 9 in the world – an achievement which includes recently beating the world number 1, a Brazilian, in Rio!

"We have worked very hard to come a long way in a short time," says Nadav, whose own practice regimen includes 4 sessions of 2-3 hours of Boccia training as well as twice weekly workout sessions with a personal trainer. According to him, athletes in the rest of the world train twice as hard, as they are sponsored and don't need to work; Levi, who studied at Bar Ilan University, holds down a full-time job as developer and computer programmer for Harel Insurance Company.

"They are wonderfully supportive at my work," he explains, "I absolutely couldn't do it without them."

There is some help from the authorities: Tournaments are funded by Ilan Sports Center and the Israeli Sports Committee for the disabled, and recognition of the sport is growing.

Today, over 100 Israelis play Boccia in 10 clubs around the country. The national squad participated in their first international European Championships in 2012, only shortly after beginning their training, and unsurprisingly, came bottom of all the teams. 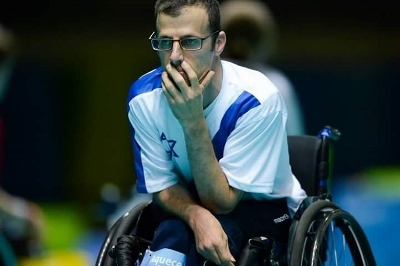 Thinking about the next move ... Israel bowls champ Nadav Levi

"We have a long way to go," he says with a smile, "but we are getting there."

Levi, 37, suffered a lack of oxygen at birth leading to Cerebral Palsy. He has never walked a step unaided in his life and hauls his incredibly fit body around on crutches. "Lucky me," he says of his life. "I grew up on Kibbutz Maagan which provided everything I needed, have a warm and supportive family and all the therapy and help that I could wish for. Today I am living a dream, and can't quite grasp that it's happening to me."

Dream or not, Israel is not exactly a yellow brick road to sporting heaven. Most sports, even ones with Olympic medal hopes, are not sufficiently recognized or funded here. There is no prize money for competitions, and athletes such as Levi pay for their own fitness training. Israelis at the Paralympics bring glory to the country; Israel has won an astonishing 124 gold medals at the Summer Paralympic Games since it first competed in 1960; together with the 124 silver and 132 bronze this adds up to the grand total of 380 medals. Today, Israel is ranked 19th overall in the medal standings; in 1968 when Tel Aviv hosted the Games, Israel finished 3rd on the medal chart with 62 medals, 18 of which were gold.

Just one more tournament stands in the way of another medal hope for Israel: Levi has to do well in the upcoming World Championships in Beijing to qualify for Rio.

"The competition is on or around my birthday," he says. "I'm taking that as a good omen."

Age is not an impediment to Boccia excellence, claims Levi, who aims to keep improving year by year. Happy birthday, and good luck!

Footnote: The excellent news is that Nadav qualified for Rio ... on his birthday!