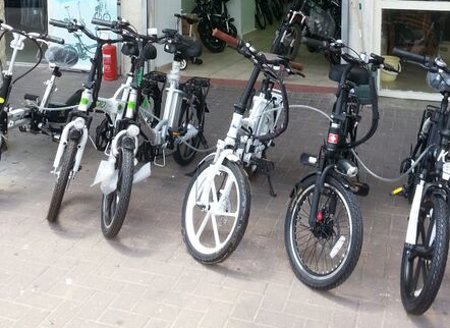 The high holidays are almost upon us and Israel's bicycle stores are busy stocking up for the usual brisk pre-Yom Kippur trade. The seasonal demand used to be for regular two-wheelers; now at least half is for electric bicycles. Even without the impetus of Hag Ha'ofanayim, (holiday of the bicycle, as Yom Kippur is nicknamed), sales of electric bikes have soared in recent years, with over 120,000 imported to Israel in the past two years alone.

E-bikes have become an increasingly common sight on the streets of Israel and are accepted as a quick, "green" way of travelling in towns and cities. They are ridden mainly by teenagers who are too young for a car or motorcycle license, but who perceive themselves as being too old – and certainly too cool – for a regular bicycle. While the e-bikes may be popular among young people, pedestrians of all ages view them as the scourge of the sidewalks.

The problem is that despite the large number of electric bicycles now on our roads and sidewalks, the legal status of these bikes has not yet been satisfactorily resolved. Are they motorcycles with pedals, or are they bicycles with motors? Without an answer to this question, the bikes continue to be ridden recklessly around town, on the pavement rather than on the road by riders without helmets, often talking or texting on the phone and sometimes carrying a passenger sitting on the front or standing at the back. The battery-powered motors are extremely quiet, and it is often impossible for pedestrians to know that a bike is coming up behind them, often at a speed of the legal limit of 25 kilometers per hour or more. Any slight movement by someone walking along the street, either to the left or right, can result in a bad accident. Indeed the number of accidents involving electric bicycles has risen significantly over the past few years.

At the beginning of the school year in 2014, between a quarter and a third of 13-year-olds were reportedly riding electric bicycles to school in the Sharon area. I can well believe this statistic, if the scores of e-bikes chained daily to the railing outside the school near my home in Raanana are anything to go by.

There has been a typically blasé attitude towards making and enforcing laws governing electric bicycles. Local municipalities claim it is a national issue and they aren't mandated to intervene. Beersheva is the one exception, with city officials announcing recently that there would be a ban on electric bikes in certain areas of the city due to safety concerns.

So it's going to be interesting to see how many riders, parents and teachers will either know about, or pay attention to a bill introduced in July, that will allow traffic police to give tickets to riders who violate the electric bike laws. These include the stipulations that riders must be aged 14 or over to ride an electric bike; they may not ride on a sidewalk that doesn't have a bike lane, and they may not hold a phone or send a text message while riding. Violations will carry a NIS 300 fine.

Stores selling electric bicycles and scooters will be required to give buyers a document with the laws listed on it. The bill is supposed to be enacted quickly, due to the many teenagers riding electric bicycles during their summer vacation – and perhaps in anticipation of Yom Kippur, when the lure of near-empty roads will bring cyclists out in droves.

This is all very well as far as it goes and hopefully the traffic police really will be able to enforce the law effectively. But what about limiting the use of electric bicycles and paying attention to accident prevention?

A friend told me recently that her nine-year-old granddaughter became entangled with an electric bicycle that had seemed to come from nowhere and knocked into her as she was walking the short distance from the family car to the front gate of her home. "Luckily she wasn't badly hurt, just shocked – as was the young cyclist," my friend said. "But it occurred to me that the cyclist had no ID and there would have been no way of taking further action or getting recompense if it had been a more serious incident."

It's a pity that the new bill doesn't cover the licensing of electric bicycles or insurance, which would address these issues. But perhaps more importantly, there is still no properly formulated plan for educating young cyclists about the correct way to ride electric bicycles and the need to be careful on the roads.

Young would-be car drivers in Israel rightly have many hours of tuition before they can take a driving test, and they must do a written exam as well. It is time to take a more stringent approach to teaching teenagers how to ride electric bicycles. Either that, or insist that kids are only allowed to ride a real bicycle with pedals, like the one their parents bought them for Yom Kippur, but which has probably never been ridden since.