Beyond the Fringe: Jewish Symbols and Secrets - Book review 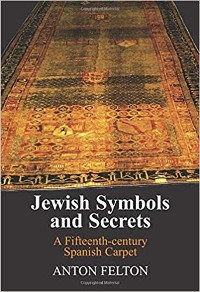 I have rarely opened a book that is clearly a work of historical research but which immediately captured my attention. How can one resist an opening like this:

"Does it really matter whether a fifteenth-century Spanish carpet was commissioned or created by Jews or by Christians or by Muslims? . . . Human achievement relies on memory, and the study of textiles, albeit somewhat neglected, but holding its store of many memories, offers us a unique perspective on the history, culture and development of society. Seeing a carpet as a cultural chronicle with its own social logic, studying it within the context of its own times, recalling those memories and asking how and why it was woven, for whom and when and where, we enter into another world and gain insights and understandings that otherwise we might not have."

Anton Felton has a truly unique ability – to wrap enormous amounts of information in the cloth (or should I say carpet) of a mystery, and unravel it exactly in the suspense mode of a detective novel. I am reminded of that wonderful book, The Hare With the Amber Eyes, and despite the rather dry title that Felton has given his book – Jewish Symbols and Secrets – this is a book, rich with historical adventure, that journeys at locomotive speed through the labyrinths of fifteenth- century Spain, the secret lives of Jews and Conversos, while relating the religious prejudices and the power plays that the Jews needed to survive. Many stories about many carpets, but in the middle of it all is the famous Vizcaya carpet. Almost hidden from view, and brought center stage by Anton Felton are the stories of the Jewish weavers, an almost forgotten radiant moment of Jewish artistry in the midst of Catholic intolerance.

There are several photographs scattered throughout the book, but the author recounts historical events and the glorious moments of textile achievement in such a vivid manner that illustrations and photographs are hardly necessary.

A truly wonderful book that engages the reader until its very last sentences:

". . . we may learn something of the lives and deaths, of the yearnings and religious imperatives of the Jews of Spain. These carpets, these few survivors . . . gave expression to the Jews' hopes and expectations of the coming of the Messiah . . ."