Jan 07 Posted by Georgina (Gilman) Yacobi in January 2020
Readers of the ESRA Magazine may be surprised to learn two things - that the Royal Academy of Dance (otherwise known as the RAD) is about to celebrate its Centenary - it was founded in England in 1920 – and that about two and a half years ago, the Israel Branch of the Royal Academy celebrated its own RAD linked anniversary, because 2017 marked fifty years since the first exams were held in Israel.  The significance of that first exam tour in 1967 is quite remarkable, since it took place under the looming threat of war. The RAD examiner, Ms Elizabeth Glass, arrived in the country when other foreigners were hastening to leave and she insisted on staying until the last student was examined, despite the increasingly urgent calls from the British embassy for her to leave. She eventually left on the last flight out of the country, just before what became known as the Six Day War broke out. RAD Headquarters broke their own rules the following year, when they allowed Ms. Glass to come back and examine the second exam session, so that the teachers could give her the hero's welcome that she deserved. 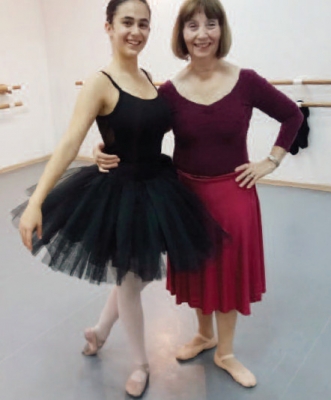 Georgina Yacobi with a student

When I arrived in Israel in the late 1970s, I found a thriving classical ballet scene, which included the Israel Ballet Company, also founded in 1967 by Berta Yampolsky and Hillel Markman, well-established RAD dance schools, dancewear shops and even professional open ballet classes, courtesy of Bat Dor Studios, Tel Aviv. I had no idea at the time how extraordinary that all was, coming as I did from London, where these things were taken for granted. It was only some 20 years later when I researched the history of the Royal Academy of Dance in Israel as part of my thesis for the RAD's B.Phil. (Hons) degree, that I fully appreciated the tremendous achievements of the pioneering teachers of the Israel Branch of the Royal Academy.

Before the establishment of the State of Israel, classical ballet did not play a major role in the cultural life of the country. On the contrary, free style, impressionistic modern dance was the popular dance genre. However, there were two notable ballet teachers who did leave their mark – Mia Arbatova in Tel Aviv and Valentina Arkhipova in Haifa, both of whom had been professionally trained in Russia. They opened their respective studios in the early 1940s, but faced an uphill struggle as they had almost no external support in their efforts to develop classical ballet. No ballet companies visited the country until the 1950's and public television only began broadcasting in Israel in 1966, thus there was little to inspire the younger generation to learn ballet. In fact, shoemakers had to be taught how to make ballet slippers and pointe shoes; not very successfully it seems, as the pointe shoes were reportedly as unwieldy as wooden clogs. 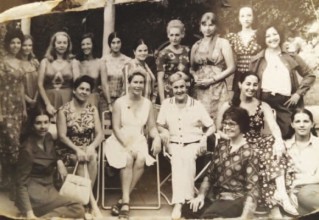 Some of the original RAD teachers pictured in 1972

Despite our ongoing security problems, we continue to enter our students annually for the RAD exams and we are indeed extremely grateful to the wonderful examiners who come here each year. Even though they have on the odd occasion examined in air-raid shelters as a safety precaution, without exception they have fallen in love with our beautiful country and its warm, vibrant society and are always happy to return. Remarkably, exams have only had to be cancelled twice, once during the Second Intifada in 2002 and once because of the Gulf War in 1991. I, myself, like my RAD colleagues here, have continued to teach through many traumatic experiences. These include the days of the Gulf War, when our students brought gas masks to class with them, right up until the recent summer, when our classes and school recital rehearsals were interrupted by rocket attacks. Even though more than five decades have passed since the establishment of the Israel Branch, its teachers remain devoted to the Academy work, which is constantly changing in order to keep up with current teaching practises. Our teachers and students come from diverse backgrounds, showing the many faceted faces of the country - all coming together with a love for classical ballet as the unifying element. The Branch is indeed characterised by its Israeli-ness! We recently held a celebration in my house for the Centenary year. RAD teachers and schools were actually told that all Centenary events needed to wait until January 1 st 2020, however, we decided that according to the Jewish calendar it was already the new year, so we went ahead and celebrated ahead of the rest of the world!
There is a story that has passed into legend regarding the choreographer Anthony Tudor's first visit to Israel in the 1950's. He remarked that there were two miracles in Israel – one that there was water and the second that there was ballet! To that, from my perspective as a veteran RAD teacher, I would add a third miracle – that after 50 plus years the Israel Branch of the Royal Academy of Dance is still going strong.

Georgina Yacobi ARAD B.Phil (Hons) RAD Life Member Information on RAD Registered Teachers and Schools in Israel may be obtained from Gali Zamir – This email address is being protected from spambots. You need JavaScript enabled to view it. Donations to our scholarship fund are always most gratefully received.