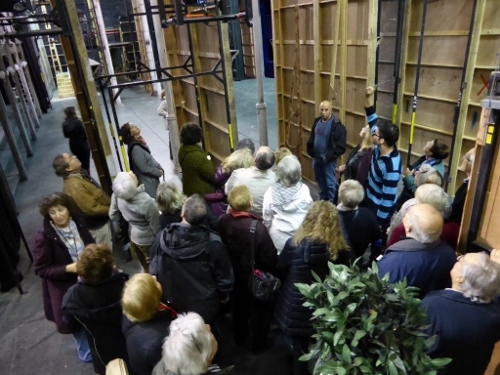 Rain could not spoil the spirits of the 35 people who had booked on the ESRA Ramat Aviv Backstage Tour of Tel Avivi's Habima Theater.

We were greeted by our guide, Ofer Regirer, an actor from the theater, a talented young man possessing charm, intelligence and the ability to share his knowledge of theater and the history of Habima with us.

We began our tour in the Bertonov auditorium, which seats 220. We learned that Habima was founded by actor Nahum Zemach in Russia in 1912. After touring Europe and America in 1926 the theater left the Soviet Union.

Part of the troupe remained in the United States, and the remainder established a permanent theater in Palestine. The actors decided that all performances would be conducted in Hebrew.

During the season of 1928/29, Habima gained a reputation as the national Jewish theater, with a permanent repertoire and stage in Tel Aviv. (Someone mentioned that in the early days of Habima, the actors spoke Hebrew, but with heavy Russian accents). 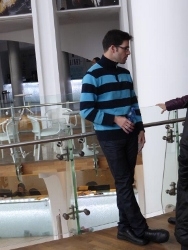 Hanna Rovina as Leah’le in The Dybbuk

The actress, Hanna Rovina, one of the original members of the theater, became a cultural icon that many feel represents Jewish and Israeli theater.

The Habima Theater we visited is the beautiful result of four-and-a-half years of renovations and restorations. Architect Ram Karmi redesigned the historic building which reopened in January 2012.

The very impressive front of the building is glass from floor to ceiling, with prominent white pillars, and invites those on the outside to share the views inside.

We felt privileged to be able to tour backstage. We visited the new rehearsal rooms, the actors' dressing rooms, the design and sewing center for costuming, and a number of the theaters. Each theater is a different size and color.

The largest, the Hanna Rovina Hall, is blue and seats 930 people. We were very excited to see the beautiful sets and props, which were being used in the production of My Fair Lady.

Costumes, props, actors, lighting, sound, glamor – we saw it all and enjoyed every moment. 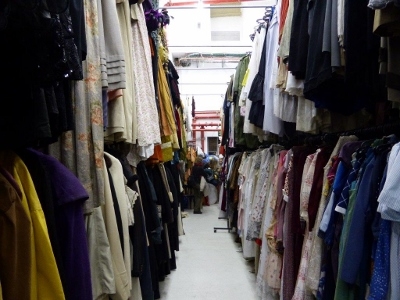 The costume storage gallery and (below) rows and rows of shoes 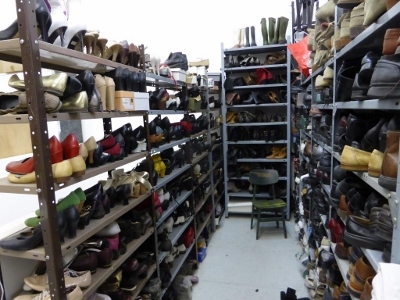