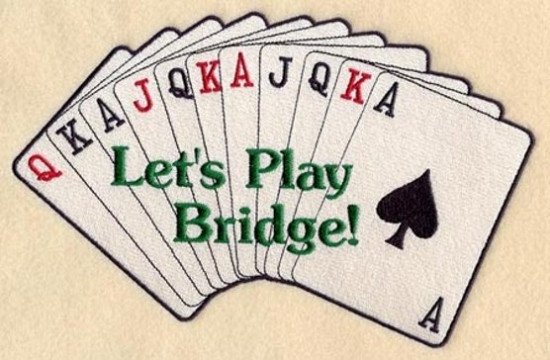 An Avoidance play is a technique whereby declarer, given a choice of possible plays, chooses one that avoids surrendering the lead to the opponent who can threaten the success of the given contact. By way of explanation, the second hand I gave in my previous article (ESRAMagazine 201) as "another 3NT contract requiring careful play" is, in essence, a prime example of such an avoidance play:

West leads the ♠5, his fourth highest of that suit. You try dummy's ♠10 but East covers this with ♠J and you win in hand with the ♠K. Outside of the heart suit, you have 5 tricks on top, so you need at least 4 tricks from the heart suit to make the contract. If hearts break 3-3 you have 5 tricks in that suit for a total of 10 tricks. However, in the more likely event they are 4-2, you will have to concede a trick to the ♥J before you can establish your ninth trick. You cannot afford to lose the trick to East, the danger hand in this case, as East would play a spade pinning your ♠Q under West's ♠A and ♠J and the opponents would potentially take 4 spade tricks to defeat your contact.

The avoidance play is to is to cross to the dummy at trick two with either of the minor suits and play the ♥10. If East does not cover, duck to West. If West wins, he cannot attack spades without giving you a tenth trick. Whatever the outcome of this safety avoidance play in hearts, you have at least the 9 tricks needed for the contact and 9 is all you need.

Remarkably, a hand very similar to the one above, came up recently in a competition at my local club. Sitting West, I led the ♥7, my partner covered dummy's ♥9 with the ♥10, and declarer took the trick with the ♥Q in his hand.

Declarer had 7 tricks on top: The heart he had won, plus the Ace and King in each of the other three suits. He needed another two tricks in clubs to fulfill his contract. Statistically, with 9 cards in the club suit, the odds favored playing for the Queen to drop under the Ace and King. However, taking into account that if they didn't break 2-2 and East, the danger hand again, held 3 or 4 clubs to the Queen, he would not make the contract, declarer played a small club to dummy's ♣A at trick two and led the ♣J. When the ♣Q did not appear from East, he played low from his hand. The finesse of the ♣Q worked. He ran off three more clubs, squeezing the life out of me. I had started with ♠ Q J 9 4 ♥ A J 8 7 4 ♦ Q J 9 ♣ 9 and was forced to pare down my hand to ♠ Q J 9 ♥ A ♦ Q J 9. The wily declarer ended up with 12 tricks!

The need for avoidance plays is not restricted to No Trump contacts. Consider the following hand in which you, as declarer in 4Sp, receive the lead of ♦J:

You play a low diamond from dummy, East plays low and you win with trick with your ♦K. You have a certain loser in diamonds, a potential loser in trumps and two potential losers in hearts. You can get rid of a heart loser on dummy's fifth club but you must draw trumps first. You can try finessing either opponent for the ♠Q but this time West is the danger hand as you will lose two hearts immediately if West gets in to lead that suit and East holds the ♥A. Therefore, at trick two, play your ♠A followed by the ♠9. If the ♠Q does not appear from West, play dummy's ♠10 for the finesse. If the finesse loses to East, East cannot attack hearts without making dummy's ♥K good, irrespective of who has the ♥A.