At age of 91, Edith is still helping hospital 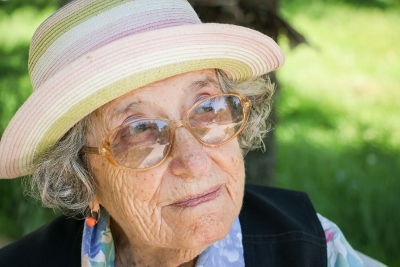 My husband and I are retirees in our late 60s and we work for a still-employed 91-year-old! Edith Lieberman is the longest-serving employee at Sanz Medical Center Laniado Hospital in Netanya. She is Senior Staff Officer in the Public Relations Department and also a lecturer, fundraiser and tourist assistant and has been our "boss" for the seven consecutive years of our volunteering at the hospital.

Abe and Edith Lieberman made aliyah in 1971 from Brooklyn, NY with their five sons. In her early years in Berlin where she was born, Edith had wanted to become a doctor, but at the time of her aliyah, she wanted to do what she had done in the United States—teach sports, swimming and health. But sometimes you have to rely on your avocation to get ahead.

A building had been erected for a new hospital in Kiryat Sanz, a Chassidic community in the north of Netanya, but there was no money to complete it until a $500,000 grant from the Eisenhower administration helped make it possible. Edith came to Laniado in March 1973 and went to talk to Rabbi Eisemann, who was Public Relations Director. When she told him that she was frum (religious) and from Boro Park, Brooklyn and had been president of the Young Ladies Auxiliary and the PTA at her children's yeshiva, he hired the spunky mother as his assistant, based on her volunteer experience in PR. Two weeks later, he left for America on a fundraising tour and shortly after that, the 1973 war broke out. The war put off the hospital's operating as a medical facility, as many construction workers left to serve in the army.

With little direction from a boss stranded abroad, Edith organized with Magen David Adom to bring in stretchers to a large hall to be used as a blood donor station. During a curfew and without a key to the building, she slipped in through a window to her then-basement office in order to work.

Together with Johanna Bar-Menachem, a Histadrut Health Care Fund nurse, and wife of the mayor, Edith coordinated with other organizations to talk about how to open the hospital in Netanya, at the time a city of 75,000. In 1974, they held the first major luncheon to raise funds for the hospital. Edith also organized smaller luncheons for which they cooked themselves on Sterno-fueled stoves. Funds raised allowed one department to open —radiology, and later a laboratory.

In 1975, the Tache Outpatient Clinic opened and June 1976 saw the inauguration of the Maternity Department. Laniado was finally a working hospital.

Enterprising Edith asked people to donate unneeded precious items for a sale at Laniado. She also helped organize fundraising luncheons and dinners. After he all-volunteer Netanya Friends of Laniado, was established as a nonprofit organization, they opened a clothing resale shop near the center of town. Edith initiated life memberships in the organization and set up donor boards for recognition.

From the beginning, Laniado Hospital was a different sort of facility. Its founder was Rabbi Yekutiel Yehuda Halberstam, the scion of the Sanz Rabbinic dynasty, the Klausenberger Rebbe, who lost his first wife and eleven children in the Holocaust. Wounded, he vowed to build a hospital in the Holy Land if he survived. He married again, and while living in the U.S., decided to found a Chassidic community in Netanya and then to build the hospital, which proved the harder part of his plan.

A nonprofit public institution, the name Laniado originated from a bequest from the Laniado family estate. The hospital is an Orthodox facility serving all, even though the organization is committed to function with adherence to halachic law. It is the only Israeli hospital that has never had a strike or a work slowdown.

The feisty Mrs. Lieberman used her Anglo-Saxon connections to build relationships and to maintain donors over the years from America, Europe and the English-speaking community in Israel. Many donations come from her former students, from people she has met over the years both in Israel and in the United States, from her efforts at publicity through her health lectures and articles both here and abroad, from Hadassah and B'nai Brith's Winter in Netanya volunteers (such as we were), who work at Laniado and then stay involved.

Edith Lieberman has a way of making people care about the hospital. For 12 years, she and Abe went to Florida not so much for vacation, but as an opportunity for Edith to give lectures and to raise funds for Laniado. From the beginning, she has published a monthly newsletter about the hospital, keeping donors informed about each new building, department, what doctors are doing, how many babies are born, what new equipment has been added and what is needed. With every donor receipt goes a personal thank you letter from Edith, with a handwritten addition to those with whom she has a personal relationship, and a copy of the latest newsletter. Twice a year, she sends holiday greetings with newsletters and a plea for tzedakah. When people donate in someone's honor, Edith writes them a personal poem to commemorate the occasion.

Today the 380-bed comprehensive health care center caters to 300,000 residents of Netanya and the Sharon area.

In honor of Edith and Abe Lieberman's 65th anniversary, the hospital held a dinner which recognized Edith for her 40 years of work and Abe for his 40 years of volunteering. And, of course, it was a fundraiser for the hospital. Family and friends from around the world came together to honor the remarkable couple and their devotion to each other, their family, and to Laniado Hospital that, like all of their children, grew and grew under their care.

Over her four decades of service to the hospital, Edith has been successful in raising significant sums, sometimes years after first becoming acquainted with the donors.

In 1974, an elderly man about to enter an old age home in Kiryat Sanz donated 50 lirot to the hospital. Edith kept in touch. Twenty years later, Edith was asked if she knew the man - he had just given $50,000 to Laniado Hospital.

When in Florida eight years ago, Edith got a phone call from a stranger from Canada with a business in Florida. He said he had heard about her and that he had orthopedic equipment to donate to Laniado Hospital. Though he was initially seeking a tax receipt for a certain amount that Edith could not offer, she nonetheless heard from him a year and a half later. He had decided to ship all of his showroom samples to Laniado at no charge, not even for shipping. He told Edith to keep for herself anything that she needed. She decided to keep a walker that she uses today to scoot around the hospital campus. The rest of the donated equipment is being used in the current Orthopedics department with the last of the items awaiting the completion of the new Orthopedics building. And, by the way, the man is still a donor.