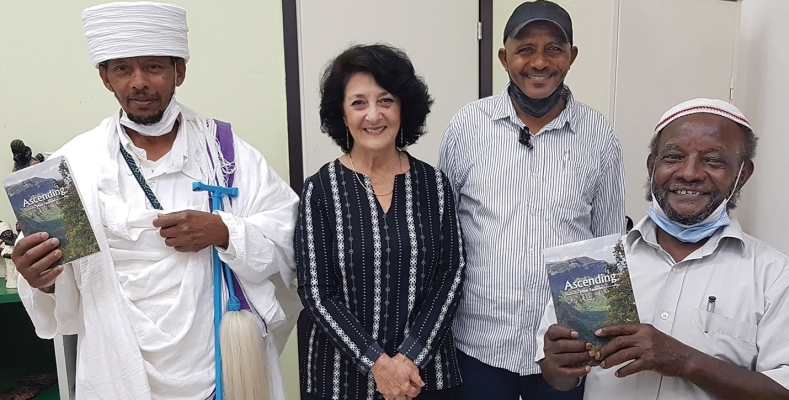 Back in December 2021, Mimi Tanaman wrote an article for ESRA Magazine explaining how she came to write her book, Ascending. Mimi's inspiration to write a novel about the experiences of the Ethiopian olim started in 2004 when she heard an Ethiopian-Israeli woman on the television program The Ambassador telling her story about leaving Ethiopia. Then, after participating in the ESRA project "Journey to Identity" trip to Ethiopia in 2018 as a trip mother, Mimi decided to embark on writing her book, Ascending. Her deep involvement in ESRA, as Mimi notes in her section of Acknowledgements, helped her to write the book.

By profession, Mimi runs her own translation and copywriting company called Hi-Text. Ascending is her second novel. Her first book was a story about late-in-life discovery of adoption titled Lost & Found. Mimi has also written English translations in rhyme of children's books.

Ascending tells the story of the Jews who came from Ethiopia to Israel with Operation Moses in the early 1980s. Written from the perspective of a woman who, as a child, makes the trip with her parents and siblings across the desert to Sudan, Mimi eloquently describes the lives of Ethiopian Jews, their culture, and their way of life both in Ethiopia and in Israel. The experiences of people who come later with Operation Solomon in the early 1990s, and the newsworthy events that happened inside Israel are also woven into the narrative.

The author divides the novel into three parts. Each section depicts different aspects of life and is poignant. In part one, the narrator simply but beautifully describes how people lived in the villages of Ethiopia, as well the terrible suffering and losses endured in crossing the desert to refuge. In the second section she tells of adjusting to living in Israel, the culture shock in adapting to modern luxuries which are taken for granted such as indoor plumbing and electrical appliances. Most importantly, the narrator discusses the discrimination that they endure because of their skin color and how they work to make things better. The final section is the narrator as a parent with children of her own, hopeful that her children's future will be better.

Mimi has sensitively written an excellent story that promotes an awareness of the Jewish Ethiopian community in Israel. This book helps people to become more sensitive and tolerant of those whose skin color and culture are different from their own. As prejudice is not only an Israeli issue but also a problem worldwide, reading this book, may, in some small way change people's outlook. As Mimi herself writes on page 220: "for knowledge brings understanding and understanding is an antidote to prejudice".