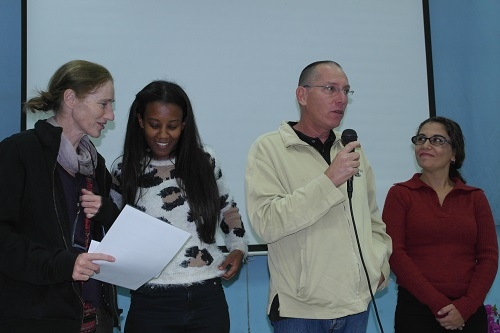 Michael, Heidi and Maya Kirsch with Sara Wasa giving her a scholarship in memory of their mother Shirley Kirsch donated by the ESRA Tel Aviv Branch. Photos: by Tal Zuck

ESRA's Students Build a community annual Scholarship Award Event is, without doubt, one of the most outstanding happenings in our calendar. The coming together of 13 students – working within ESRA's 'Students Build a community project – and the donors who have generously supplied scholarships to these students made for a moving experience for those privileged to participate in this award ceremony. ESRA's Project chairperson, Nina Zuck, welcomed all to what she called an evening of Zionism and optimism.

Currently 34 university students are mentoring 136 kids in four Netanya areas of deprivation. These students are an incredible role models for their pupils. ESRA can feel proud of its contribution towards creating a better tomorrow for the youngsters being mentored and, ultimately for the State of Israel. This is the very essence of Zionism. Nina emphasized that none of this would be possible without the generosity of the donors. Of this year's 13 award recipients, eight were born in Ethiopia. It was heartwarming to hear that in spite of their long, and often, painful journey from Ethiopia to Israel they are succeeding in their studies whilst at the same time giving back to their community of origin.

Typical of the background to the students being honored is Youkiel – born in a village in Ethiopia in 1986 – he came with his family to Israel in 1991 with Operation Solomon. Whilst he and his five siblings made it to Israel, three others perished in Ethiopia. Tragically this is typical of the suffering of our Ethiopian brethren who made the hard trek from Ethiopia to Sudan in order to be airlifted to Israel. Youkiel served in the IDF Paratroopers Brigade Reconnaissance gaining three military medals whilst fighting in the Second Lebanon War. He is currently studying for a degree in Law and Business administration whilst increasing his mentoring hours as a result of being granted a scholarship.

Why was this year's ceremony different to previous years? Nina was delighted to inform us that many more ESRA branches are now donating scholarships – a sign of the meaningful link and involvement of our members with this wonderful project.

ESRA chairman Baruch Tanaman concluded the evening by thanking Nina for her total dedication and commitment and said of her that she lives and breathes every one of our projects.

Thanks were also extended to the donors, volunteers and staff members for contributing towards a night to remember. 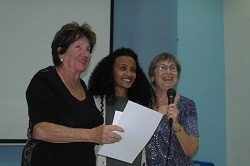 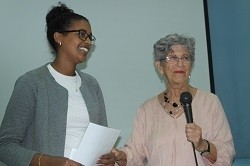 Terry Morris, standing in for Irene Stohn and the Kirshner Fund, presents a scholarship to Sara Alemo 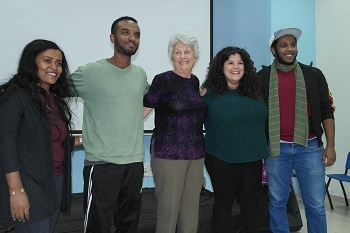