Aesop In the City 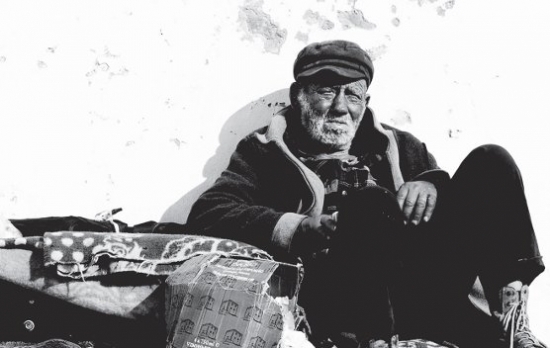 A work of fiction by Pnina Moed Kass

One winter morning a man buffeted by the wind shuddered and awoke. He was a shabbily dressed man without a home. He slept on a pile of carton pieces on the sidewalk in the shadow of a building.

He kept himself barely warm with an assortment of nylon bags.

Many city people hurried by, either not seeing him or paying no attention to him. They carried containers of coffee which they drank from, and pastries which they ate as they made their way to work.

One well-dressed young man stopped, taking care to halt a few feet away from the old man.

It was clear what his purpose was – to admire his reflection in the large store window.

He patted his well-groomed hair, rewound his woolen muffler, and adjusted the collar of his heavy coat.

"You know," said the old man sitting on the sidewalk, "I'm guessing you are very successful."

The well-dressed young man looked down at the shabby old man who had spoken to him. He approached him. "What makes you think that?" he asked.

"Your air of confidence, your assurance, and your clothes which are in such good taste," answered the shabby old man in a voice that echoed knowledge of these things.

The well-dressed young man was curious. He stepped closer and looking down at the unwashed seated figure, he sniffed and said, "Really old man, and what do you know about clothes?"

"I once was a tailor to very exclusive clients," answered the shabby old man in a low voice as if sharing a secret with his questioner.

"Let's see if you know what material my coat is made of, Mr. Exclusive Tailor," said the well-dressed young man with the assurance of the successful.

He took off his coat and handed it to the shabby old man.

"Do you mind if I try it on?" asked the shabby old man. "Fit and fabric are a tailor's twins."

"Not at all, and here's the muffler, which is also of a very rare material that I'm sure you can't identify".

The shabby old man got up from his bed of cardboard. He took off his torn jacket, which had more threads than material.

"I'll hold that for you," said the well-dressed young man. He held the jacket between two fingers, not wishing to soil his hands.

The shabby old man shivered in his stained shirt and shapeless trousers.

"Hurry," urged the well-dressed young man, "I am anxious to see if you can guess the cloth of my coat and the material of my muffler."

"Would you sit on the cardboard so my bed will not fly away in this wind?" asked the shabby old man with a soulful politeness.

"If it will help you to guess the fabrics, I suppose I could," answered the well-dressed young man.

"It will, it will," the shabby old man said, and moved some distance away so that he also could admire himself in the large store window.

Meanwhile the well-dressed young man lowered himself onto the pavement. He managed with great difficulty to sit on the several layers of what was once a cardboard box.

Then he busied himself folding the nylon bags into a pillow behind his back so he wouldn't feel the cement edges of the building wall.

Needing both his hands, he put his empty coffee cup on the ground next to him.

When he looked up the shabby old man had disappeared. His face turned red from the anger he was feeling, and he yelled and he shouted.

Passersby shook their heads at the sad fate of this young man.

And they dropped coins into his coffee cup, for he was a poor man without a coat or muffler to keep him warm in the cold city.