A visit to ESRA’s Vintage shop 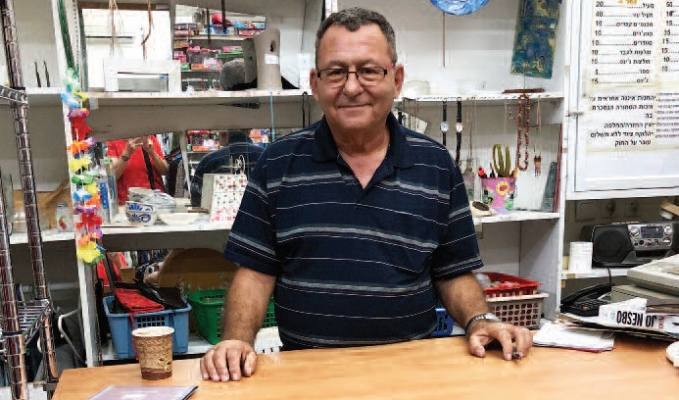 Story and photos by Carol Novis

Is traditional retail selling on the way out, superseded by online shopping? Some might say yes, but then they clearly haven't visited the ESRA 'Vintage' shop, on Rothschild St in Kfar Saba, where a myriad of enthusiastic shoppers enjoy the old-fashioned delight of scouring through the racks for a bargain. Amazon itself might well envy ESRA's customers, some of whom return on a daily basis to see what this storehouse of second-hand treasures has to offer. (There is also an ESRA shop in Raanana.)

"It's a laugh a day," says Maurice Singer, originally from London, who came on aliyah in 1968 and is retired from a career in the Jewish Agency. "That's the main reason I do this job."

Maurice is the manager of the shop, and heads a team of 16 part-time volunteers. Five years ago he was approached by ESRA and asked if he could revitalize the shop, which wasn't doing well at the time, and he's been there ever since. "Today," he says, "it does very well."

What's funny about working in the ESRA shop? "Well, I'll give you an example," Maurice says. "One day, someone brought in a bag with a full set of false teeth. I put them on a shelf, and within 20 minutes, they were gone. Someone paid NIS 60 for them. I didn't ask what he wanted them for! 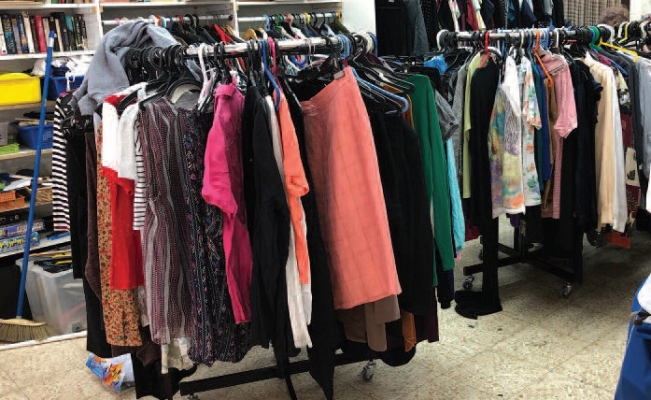 "A few weeks ago, a guy came in and chose a wine glass, which cost NIS 1. But he wouldn't buy it without measuring the thickness of the rim. It had to be exactly a millimeter and a half. He bought it and then two weeks later, bought another one, measuring that one too. Why? Who knows? His wife told him that's how thick it had to be.

"Other people will only buy a specific article. We have a customer, for instance, who comes in every day just to see if we have any belt buckles. If there is a belt, he'll ask me to cut off the leather and throw it away. He only wants the buckle. There's another man who collects salt and pepper sets – he has 800."

Has he ever found anything valuable? "Well, no Renoirs, but occasionally some silver."

He has no doubt that for many people, shopping at ESRA is akin to an addiction. "One fellow comes in three times a day, so he gets first pick. You can actually see the pain on some people's faces if they don't find anything."

What Maurice has noticed, he says with amusement, is that every single person who brings in clothing tells him that the garments are hardly used and in wonderful shape. "I have never yet met a person who says that his stuff is a whole lot of shmattes!"

On my recent visit to the ESRA shop, the place was already buzzing 20 minutes after opening time. Although it's small and crowded, a gaggle of people of every age and apparent socio-economic standing were already elbowing each other out of the way to survey the haul of the day. As they left, more potential customers took their place. There was never a time during my visit when the store was empty.

Outside, a display of shoes (one of a pair only, to prevent them walking off, so to speak) on offer at NIS 15, drew people in. In my first five minutes in the shop, three pairs were sold. (And very nice they were too, including a brand name pair of sports shoes.)

Jackie Diamond was the manager on that particular shift, helped by a long-time volunteer who comes in every day, plus whichever volunteers are available for sorting goods. A soft-spoken former Scot, by way of London, Jackie has been volunteering for the past three years, following in the footsteps of her late mother, Evelyn Ellison, who worked in the shop into her late 80s. "I enjoy it," she says. "It's always interesting."

One side of the shop is closed off and houses bag upon bag of donated goods, which pour in daily. These are sorted by volunteers into useable and non-useable goods; those that are not clean or not wearable, about 60%, are sent to a re-cycling center. The rest of the clothing is neatly hung on hangers – never thrown in bins – and displayed.

While much of the merchandise is not exactly high fashion, Jackie says that "Some of our clothing comes from brand name stores such as Max Mara, Ronen Chen and Gershon Bram. No matter how expensive it originally was, most garments are priced at NIS 10, including fancy evening wear. I know someone who got the dress she wore to her son's wedding here for NIS 10." 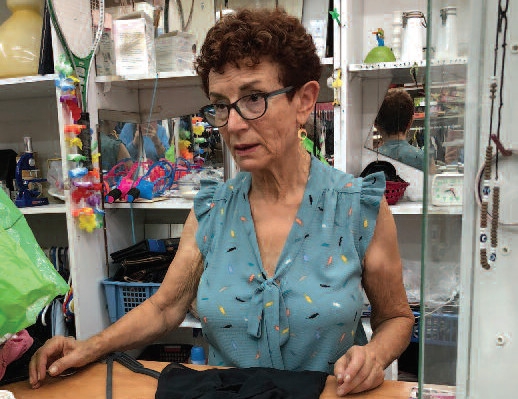 Jackie Diamond has been volunteering for three years

I spied a hat that might well be worn to a royal wedding. I also noticed a pile of pristine white

t-shirts printed with logos of sports teams. "Those are new," said Jackie. "They were donated by a manufacturer who had too many. We're selling them for NIS 5 each. People sometimes donate garments that are absolutely new and have never been worn."

Bargaining is not allowed, not even for dealers who buy quantities. "Some people try to bargain, but we tell them we don't do that, because the money goes to charity. The main thing is to get the goods moving, which is why we price them low." She admits, though, that they do get the odd thief. Not much to do about that.

Clothing is not the only kind of goods sold here. In fact, almost anything goes, except for furniture, for which the shop has no room. There are household goods, cutlery, games, books, costume jewelry – everything that people bring in. People will buy almost anything, as can be seen by the fact that a chair used for seating is labeled "not for sale." Most of it is, not to put too fine a point on it, alte zachen, but there is certainly the occasional bargain. According to Jackie, "I got a numbered print by an American artist for NIS 60, which is a lot of money for this shop, but when I looked on E-bay, a similar one was going for £800."

What accounts for the popularity of the ESRA store, besides the thrill of the hunt? Says Jackie, "People know about us now. Some come here every day. I recognize them all. But there's another reason too. There's a much greater awareness of recycling and sustainable living than there used to be. It's not a bousha [disgrace] to shop in places like this anymore. You can buy a whole new wardrobe for NIS 100, so why not?"

Says Maurice, "We all have a lot of fun here, and we're doing good as well. It's a win-win situation."