A Matter of Perspective

May 03 Posted by Sharon Bacher in December 2007 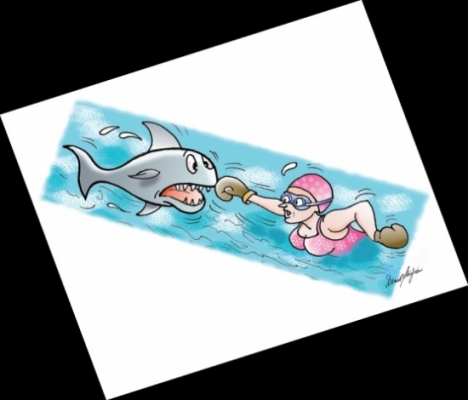 In my new swimsuit, I stepped gingerly into the pool, gasping as I always do at the slight shock of cool water on my skin. I pulled my bathing cap down over my ears and put on my goggles, taking a moment to look around.

There were few people at the pool at that early hour in the afternoon – a time when most Israelis sit down to a late Shabbat lunch. It suited me just fine. In fact, I had, over the course of a few weeks, narrowed down my swimming time to just this period, when competition for the six lanes was at a minimum and I might even have one to myself.

I nodded to the lifeguard who smiled back as he approached the control box and checked the temperature and chemical balance of the water. Satisfied, he returned to his chair, put on his earphones and allowed himself to become oblivious to everything else around him.

Then I began my routine: forty laps was my target. Breast stroke to one end, backstroke to the other. For the moment I could approach my task in a leisurely and confident manner. I tried to swim as the instructor had taught me: keeping my chin tucked in and my eyes glued to the floor of the pool. Up and down, striving to coordinate legs and arms in a seamless flow. So long as no one came into my lane I would be content to glide backwards and forwards, counting my laps: one, two, three, four, five… and after five, why, it was almost ten.

My thoughts ebbed and flowed, escaping temporarily from the confines of the pool and then returning as I reminded myself to count. Was it eleven or was it twelve? I had finished one group of ten… or was it two? I would buy a sandwich after my swim… a tuna sandwich or maybe egg. I deserved it, didn't I; having used up… how many calories did one use in a forty-lap swim? A woman passed me. Nice figure, I thought, examining her under the water — for in the pool one could stare quite frankly without being observed. Her body was white and graceful; her breasts small, her arms narrow and pointed. She seemed utterly absorbed in describing long arcs with her arms and she reminded me of a windmill I'd seen on the cliffs of the Golan. When we both reached the end of the lane and came up for air together, I smiled, tugging at my goggles to release the water that had collected behind the panes. But the woman had turned and was well into the stride of her next lap.

I propelled myself backwards in the perfect faith of having a clear run. One, two, three, four … As I swam under a fanlight my eyes caught a beam of sun, which had moved into my orbit and almost blinded me. I shut them, momentarily disoriented, squinted, noticing suddenly how high the side-wing of the building towered. Had anyone ever jumped from the top, I wondered, swimming a little faster as I imagined a body hurtling through space, crashing into the glass window, shattering it into a thousand fragments. The water flooded my face and nose, making me splutter and cough.

Someone had encroached on my space: a man — a shark – cut through the water, taking possession of the lane. A tense knot formed in my stomach as I contracted against the edge of the pool, swimming along the wall with my hand so that I didn't stray into the line of the intruder's trajectory. The man swam aggressively, seemingly blind to my existence, claiming my territory. I would be hit if I didn't move out of the way.

I lost track of the numbers. Where was I? Was it twenty-three or was it twenty-five? A hand nicked my leg and I stopped still and turned angrily to glare. If war was what the man wanted, then war was what he'd get. This was my lane.

I deliberately spread myself out in the middle and braced. We came at each other from opposite sides; he swift, needle-sharp, a jet propelled by testosterone. Me, slow, measured, stubborn…. We drew closer. I kept my head up, staring at the man through masked eyes. He kept his down. I would not give way. I would not be cowed.

A split second before we collided, the man glanced up and for the first time seemed to see me. Looking confused, he frowned and swam away. Victory was mine!

After that, we kept our distance. I clung to my wall; he kept to the other side. I wasn't anyone's pushover.

Later, when I'd finished swimming and showering, I was ushered into the elevator by two gallant men, looking spruce and sporty. One, with graying hair and friendly blue eyes looked at me and smiled. "Ground floor?" he asked, pressing the button. I nodded and stood a little straighter, pleased that I'd taken the trouble to blow-dry my hair and apply make-up to my face.

The man shook his head to his friend and said in a warm English voice: "The weirdest thing happened to me while I was swimming."

"I was doing my own thing and minding my business," the man said, "but the pool got so full that we had to swim two or three to a lane. Anyhow," he continued expansively, including me in the conversation, "there was this woman doing backstroke… as if she owned the pool. You should have seen her… arms stuck out at the side." Laughing, he imitated the way I'd swum. "And so aggressive! For a few moments back there, I had the feeling she wanted to kill me!"

His friend laughed and looked to me for agreement. "Sometimes," he said, shaking his head, "People lose all sense of perspective."