A Love & Beyond - A Book Review 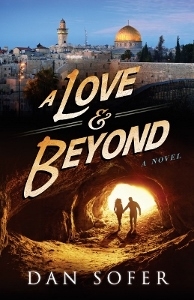 This thriller had very small and very distant echoes of The Da Vinci Code, which I guess could be considered a compliment.

It uses a similar combination of mysticism and mayhem and for the Israeli reader, the additional bonus of a Jerusalem setting.

This reviewer felt like the archaeologist treading an excavated site – all of it previously encountered with no surprises.

There's plenty of flip dialogue: About cabs – "When you take a cab," she said, "sit in the back. Cabbies can't keep their hands to themselves. Mandy added Jewish Perverts to her mental list."

There are also the requisite henchmen, a character called The Teacher, a storyline about Jerusalem's Secret Treasures, Jebusite Guardians of Jerusalem, etc.

Author Dan Sofer uses his research as a lift-off for his thriller and gives his reader a solution that ties all the ancient historical clues in a very neat and expected happy end.