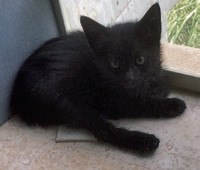 Dogged after his first check-up

I first saw Dogged just before Shavuot, thanks to the man who hangs out by the non-food garbage deposit behind my Kfar Saba apartment, where he looks for things that are useful.

I was rushing by with Sawyer, my Labrador-mix dog, trying to make it home before the elevator switched to Shabbat mode for the holiday.

I didn't see anything where he pointed.

"I don't see anything and I have to get Sawyer home," I called back.

"Listen!" he insisted. "Go look!" He knew I fed the neighborhood cats and counted on me to help.

I turned around and looked through the shrubs and under the cars in the parking lot. Not seeing anything, I turned toward my building.

Then I heard it. A plaintive wail. I followed the sound, and saw him: a tiny black kitten, peeking out from behind one of the car tires. He was crying his heart out. I put some food down and gave the rescue man a thumbs up as I hustled Sawyer toward our building.

"Come back with tuna!" he shouted behind me.

Needless to say, after Sawyer was settled I returned with a can of tuna. Now I saw that the poor little thing was injured. He had a long gash that ran from his shoulder all the way down his side. He was hungry, hurting, alone and afraid. He fearfully hobbled away as I approached. When I stepped back a good distance, he poked his head out and ate.

This ritual was repeated a few times on Shavuot and the next day, on Shabbat. I didn't see a mother or any other kittens. I wondered how he got to that place under the cars.

By Sunday I was able to nudge him into a carry box and bring him to our vet in Raanana, Sigal Slonim. 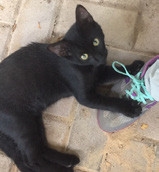 He was so small and frail that Sigal could hold him in the palm of her hand. She immediately saw the fleas: they were pouring out of his eyes, nose and mouth like streams of brown water.

"I've never seen a cat with so many fleas, in all my years of practice," she gasped. "They are sucking the blood out of him. He's only about seven weeks old. They're feeding on him because he's so weak."

Finally, it was time for the blood test and X-ray. We learned he was anemic, which wasn't surprising. The X-ray showed that his shoulder joint was not connected. While Sigal told me kittens are resilient, she doubted he would recover use of his arm. She sprayed him against the fleas and gave him an antibiotic and iron supplement.

"What would you like to call him?" she asked, as she completed his chart.

"Dogged," I told her. "Dogged, because he's so determined to live." It wasn't necessary to explain that I also love dogs.

The next hurdle was bringing him home to convalesce. I already had two cats. First there was Pirate, a black cat who shanghaied me and Sawyer on our walks every day and finally talked his way inside. Then there was Capone, the boss of the neighborhood who had fallen on hard times. I took him in because I didn't think he'd survive the winter.

I kept Dogged in the bathroom because Capone terrorized him and Sawyer barked at him when he wandered out. Meanwhile, Pirate just got disgusted and left. Dogged was so scared that he hid behind the bathroom sink in a place I couldn't reach. He wouldn't even come out to get food.

It was impossible to keep him inside. I lured him out and brought him to Storm and Snowflake, two young cats I found when they were kittens. Snowflake is delicate and has only one eye. Storm is rambunctious.

"Please protect him and teach him how to be a cat," I said to them as I put him down.

And it worked! They watched me stand over him as he ate to keep other cats away, and they copied me. I also saw them punch him with their paws to keep him in line when needed. They even kept Mean Guy away from him – Mean Guy being a badly injured cat who always tries to steal their food.

Sigal was amazed when I returned with Dogged a few weeks later: His shoulder had healed and he had no problem walking on all fours. Today, he's living happily ever after with Storm, Snowflake and Mean Guy.