A Doorway Opens On To the Golan 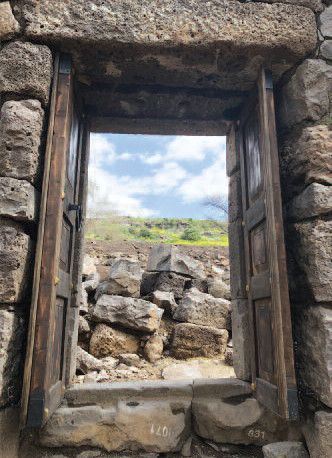 Despite the wet and windy weather of the previous week, and despite several calls enquiring if the trip was to be cancelled, a large group set out early on a grey Sunday morning, 17 March, for ESRA Netanya's sell-out trip to the Golan.

Recognizing the fact that some members had hailed not just from nearby Netanya, but from as far afield as Tel Aviv, Kfar Saba, Raanana, Modiin and Zichron Yaakov, and had had a very early rise, I left the bleary-eyed to continue with their disturbed slumber until reaching our morning coffee stop at Zarzir.

Our first site visit was a little-known viewpoint behind the Dor Alon filling station at Alumot Junction, known as Tatspeet Hod, named in memory of Aluf Mordechai (Motti) Hod, Commander of the Israeli Air Force during the 1967 Six Day War. The clouds had broken and a magnificent clear view opened before our eyes over the southern end of Kinneret and the Jordan River to the Golan. Having afforded the assembled a geological explanation as to the formation of the Rift Valley and the volcanic Golan, together with a geographic resume of the Golan, we continued on down past Kvutsat Kinneret and Degania, the cradle of the Second Aliyah.

Passing Tsemach Junction and the old Ottoman Turkish railway station, which served the Valley Railway built in 1905, we turned east and thereafter followed the line of that part of the Yarmuk River which forms the boundary between Israel and Jordan, and which separates the Gilad Mountains from the Golan plateau.

We passed the hot springs of Hamat Gader and with hearts in our hands, the driver wound his way round the hairpin bends and up the steep slopes to the top of the Golan. At a particularly steep bend his quip that all the passengers should do as he does – close their eyes – afforded little comfort and a suffused nervous giggle could be heard from some.

As we reached the summit, the plateau flattened out into a vast stretch of lush agricultural fields spreading north and east as far as the eye could see. We drove in to Kibbutz Mevo Hama, the most southerly settlement on the Golan. Established in 1968, it was the second settlement on the Golan. Looking east from this western edge of the Golan, we could see the whole extent of the Kinneret with Tiberias immediately opposite, and we could trace back over the route we had followed from Tatspeet Hod. From this vantage point we could understand the strategic importance of the Golan, as we looked down over Ein Gev and the other settlements licking the shores of the Kinneret below.

The history of the British and French carving up of this area under the secret Sykes-Picot Agreement of 1916, and the importance of water and its shortage as a contributing factor to the outbreak of the Six Day War were all explained. We met up with Gary Black, a veteran member of the Kibbutz (1974). Hailing originally from Manchester, England, and making aliyah via the Habonim Zionist youth movement, Gary talked to us about life and work in the Kibbutz, and gave a detailed explanation of the very varied produce of Mevo Hama.

Having bidden farewell to Gary, we headed north to Kibbutz Natur and the nearby archaeological site known by its Arabic name, Umm el Qanatir (Mother of the Arches) and recently renamed Ein Keshatot (Spring of Arches). This site, which has been years in the preparation, opened as recently as last November with a state-of-the-art visitors' center. After seeing the now obligatory movie we descended to Nahal Samach to visit the reconstructed mid-5th to 8th Century synagogue. By means of MRI scanning and other mapping technologies, an archaeological team, led by Chaim ben David and Yeshu Drey, mapped and numbered every stone which lay exactly where it had fallen during the devastating earthquake of 749 CE which had destroyed the whole village. They then began the painstaking reconstruction using a very large modern-day crane on rails that placed the stones back in their original 8th century position. The result is the recreation of a magnificent two storey, well designed and decorated synagogue typical of its period. Moving on, we saw the three arches from which the site took its name, supporting the spring waters coming out between the lava layers. These waters, rich in natural minerals, were used for bleaching flax which was exported all around the Roman Empire, providing the local residents a substantial income. It was this, in turn, which afforded them the ability to build such a grand synagogue. This newly opened site, was, without doubt, the highlight of the day.

Much to the driver's chagrin we all came back to the bus with muddy boots, exacerbated at our next stop – a short walk to the Ayit (Eagle) Fall on the edge of the Yehudiya Nature Reserve. Here we saw the effect of the recent rains – the waterfall emerging from under a layer of basalt rock, cascading in its full magnificent glory surrounded by opulent and colourful carpets of spring flowers – rananculas, blue lupin, mustard seed, spurges, crown daisy and many, many more.

Once again, storm clouds were gathering and the planned trip to the summit of Har Bental had to be curtailed. Instead we went to the Kuneitra Observation point to the east of Har Avital, from which vantage point I could point out the Syrian border, the UN peacekeeping headquarters and Kuneitra. I started to give a potted geopolitical update on the current situation and importance of this eastern Golan boundary. However, I could hardly be heard against the gathering storm and I gave up.

There was nothing for it but to retreat to the De Karina chocolate factory at Kibbutz Ein Zivan and indulge in their specialty hot chocolate with marshmallow topping … the perfect end to a perfect day.

*Stephen Kliner, a lawyer from Glasgow, Scotland made aliyah in December 2012 and has reinvented himself as a licensed tour guide in Israel.