How ‘wizards of Oz’ hopped to it and made Israel green 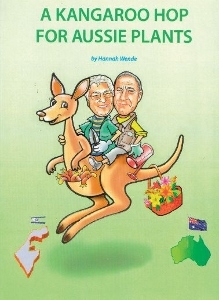 The book catalogues about 400 plants and information on their needs

When Hannah and Les Wende made aliyah in 1979, they had a clear aim - to use the expertise which they had acquired in their native Australia to beautify their new homeland. How gratifying it must be for them to look around today, thirty-three years later and realize that they have been personally responsible for the introduction of so many plants and flowers blooming in private and public gardens, promenades and town centers across the land.

They brought about complete changes in attitude to public landscaping and their ideas are now accepted everywhere. But perhaps their most significant contribution was to introduce what Hannah calls "water-wise plants" to a country which at times lives under the threat of drought.

The mythological nursery which they ran in Moshav Ein Vered became a magnet for any green-thumbed Israeli, including of course, all of us Anglo immigrants. Whether it was to create a garden or just fill a few pots for a balcony, the customers came, thrilled to be finding such a wide range of plants from which to choose, and to be able to get gardening advice freely dispensed by an enthusiastic Hannah.

Both she and Les have academic degrees. He is an optometrist and she was a teacher of maths, physics and chemistry, but they both turned their backs on their scientific training, choosing to devote their lives to gardening instead. Les gave up his optometry completely. Hannah was still able to use the botany she had studied to help what was a huge undertaking at the time - to introduce a new concept in Israel of water–friendly plants, as well as new never-before seen flowers which today grow commonly everywhere.

"We set ourselves a job thirty-three years ago and we still haven't finished it," says Hannah. "The idea was not just to bring new plants but to educate people not to waste water."

After they retired from the nursery it was taken over by their son Vaun, the only one of their six children who showed an interest in continuing their work. The others work at a variety of prestigious jobs – there's a doctor, engineers, a teacher and a lab technician. Hannah and Les decided not to stay in Ein Vered and moved away.

But it wasn't too long before they felt the need to be working with nature again.

In 2004 they opened Hannah's ESRA Nursery which is run almost entirely by volunteers and of course specializes in water-friendly plants. It is there that Hannah is able to carry on doing what she excels in and loves – talking to people about plants and how to treat them.

The book - A Kangaroo Hop for Aussie Plants - she emphasizes, is not a 'How To' gardening book but it is something that anyone who loves plants would be happy to have on their shelves. With its cheerful caricature cover of Hannah and Les, done by our very own Denis Shifrin, and the wonderful color photos of flowers of all shapes, sizes and hues, it is a lovely book to browse through.

It's also a catalogue of all the plants - 400 or so – they brought in, with plenty of information on their specific needs in terms of soil and climate, description of how they look and their botanical names. As a reference book for keen gardeners, this section would be invaluable.

For the average non-gardening reader, it tells the story of how the Wendes began their mission in Israel once they'd made the decision to come. Without dwelling on the hardships of what they experienced, it does sound pretty daunting, with not a few setbacks. Every few days, they had to go to the airport to collect delicate plants, sometimes only to find they had died in transit. They had to make regular trips to the Volcani Institute where the plants had to be kept in quarantine until eventually they were allowed to do that part of the work in the nursery.

There are also some funny anecdotes, like the time the Kfar Saba police, following up on a tip that marihuana was being grown in the nursery, came to see for themselves.

"There was no point my telling the officer that at that time I didn't even know what marihuana looked like," writes Hannah. "So I opened the seed cupboard with its row upon row of plastic jars. He was so overwhelmed with the prospect of having to search through all these seeds that he decided to trust me and leave me in peace."

The book is available for NIS 50, and almost all the proceeds go to ESRA. For gardeners it will be an invaluable reference book; for non-gardeners the interest would be in the story of a remarkable couple who made an extraordinary contribution to this country.

"A Kangaroo Hop for Aussie Plants" can be purchased from ESRA Raanana, 5 Klausner Street, Tel: 09 748 2957, email: This email address is being protected from spambots. You need JavaScript enabled to view it.