Not since I went into labor with my first-born, 37 years ago, have I spent a more impactful, strangely meaningful, Tisha B'Av. July 22nd (Tisha B'Av, though this year observed on 10 B'Av) marks the 76th anniversary of the day the Nazis began removing the Jews of the Ghetto sending them to their deaths in Treblinka . My grandparents, Chaya and Dov Berel Gruszka were likely among those.

On Sunday, following a visit to the Polin Museum which traces the 1000-year history of the Jews of Poland, we joined Jews and Poles who gathered at the Umschlagplatz to memorialize that first transport. The group then took a 2-kilometer symbolic march to the Jewish Historical Institute in downtown Warsaw. I was in awe of those who took that walk – teens, young men and women, elderly, wheelchairs, crutches, and canes. 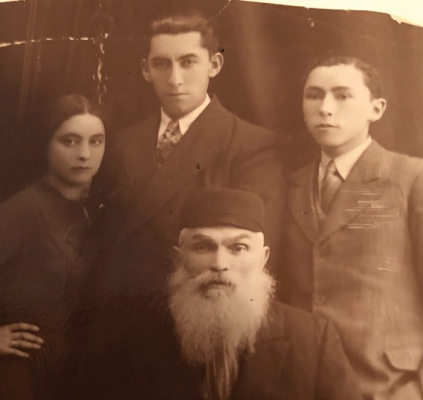 I've made a deliberate decision, indeed a vow, never to visit any concentration camps. I want to know as much as I can about how my family lived; I know all too well how they died. In the coming days, I'll visit my parents' childhood towns, and the site where my parents married. The ghosts are with me—but I hope that knowing that they live on now in their namesakes in Israel will allow them to Rest in Peace. "Our people live...and it is good" (Amichai and Tal-named for Chaya, my grandmother, and Tuvia, my young uncle – who died as a teenager, trekking on foot through Poland, determined to reach the Russian front, fighting to resist – and never having the chance to truly live) 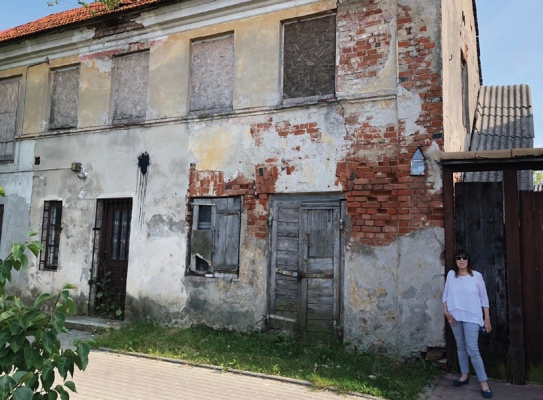 At the house in Jadow, Poland, where Judy’s grandparents, Dov Berel and Chaya Gruszka, briefly found safe haven from 1939-1941. It was from here they were transported to and murdered in Treblinka 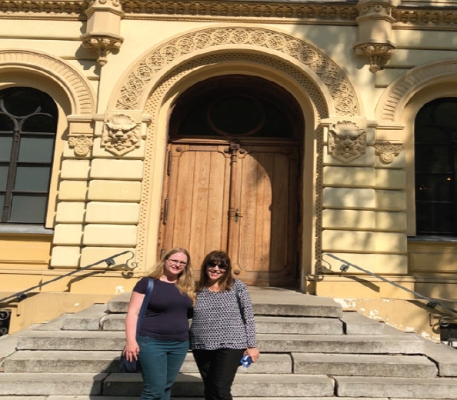 Judy Golub and our guide, Domenika in front of the Nozyk Synagogue, the headquarters of the Jewish community of Warsaw and the only surviving synagogue from pre- Holocaust Warsaw. 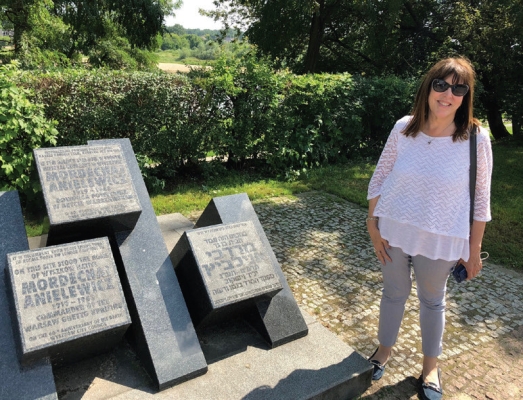 Judy Golub next to Memorial to Mordechai Anielewicz, hero of the Warsaw Ghetto and Chana Gruszka’s (Judy’s mother)neighbor

It's been almost 4 years since that trip to Poland...and still the excitement, energy, and exhilaration of that week remain...as does the sadness, regret, and pride. As my friend, Elisheva predicted, this was the emotional trip of a lifetime. There wasn't a day without tears or an "El maale rachamim", rarely a moment without a sense of history and loss. But that wasn't all...

Mila Street was the heart of the Ghetto - number 18 made famous by the Leon Uris novel, housed important Jewish communal offices. My parents were married at number 20. Neither building exists today. Mila Street is now a leafy boulevard in a desirable neighborhood- a neighborhood, our guide explained, in which many Jews can't bring themselves to reside - "too much like living in a cemetery ".

It was, however, our visit to Wyszkow, my mother's birthplace, that proved a revelation. Wyzskow epitomized the "shtetl"; a small, agrarian town, it was home to 9000 souls, more than 60% Jewish, at the turn of the 20th century. It is its very ordinariness that makes it so compelling, so representative of 1000 years of Jewish life in Poland...and its fate so devastating. 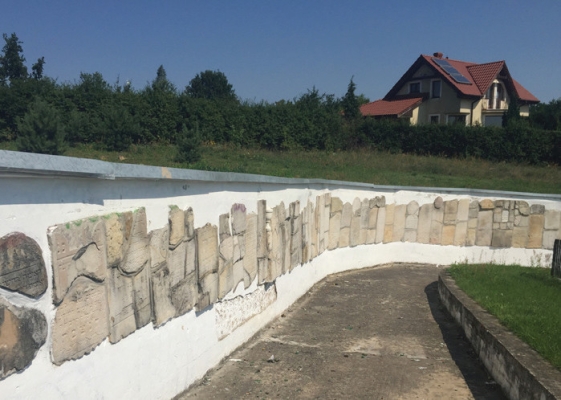 We begin our day at the Wyszkow cemetery destroyed by the Nazis as they bombed and entered the town in September 1939. Today, a memorial to the Jews of the town stands on the site. Dedicated in 1997, by the children and grandchildren of Wyszkow's Jewish residents, it consists of the remnants of some of the desecrated gravestones recovered and placed into a wall on a grassy hillside; it appears dilapidated and unkempt today. Its original gravesites lost to history and weeds.

My mother never wanted to return; she was convinced that the shtetl she knew and loved no longer existed. She was right...and wrong. We did find her street, her address, her beloved River Bug - just as she always described it, just as she had painted it in those days following the close of WWII, the days she was carrying life (me) and mourning the loss of everything she knew as a child. That painting hangs now in my living room.

I saw the grassy little hill in front of her home leading right down to the river- the river in which she swam in summer, on which she skated in winter – where she played with her friends, met with her youth group, read her books.

With a 4th grade education, she had a university graduate's love of reading and learning. She loved Henrik Sienkiewicz, Emile Zola, Upton Sinclair, Sinclair Lewis, Theodore Dreiser - she introduced these writers to me, insisted that I read their books. These were the authors she revered — journalist-writers who recorded and tried to re-order their worlds. She understood the importance and power of words.

The ghosts are with me -

A house, broken and abandoned stands alone on that street, at that address. - just as she described, mere yards away from the site of the home of Mordechai Anilevich, the little boy up the road - so easy to babysit for him. The little boy who grew up to lead the Warsaw Ghetto fighters.

Something remains of my mother's Wyzskow...and so much is gone . Indeed, not a single Jew remains in the town. 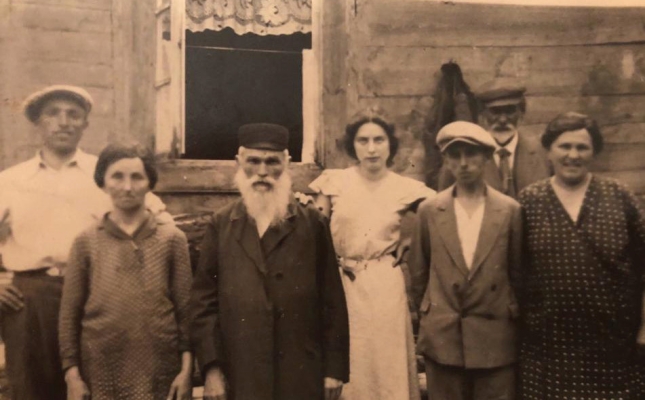 We had lunch that day, on my mother's street, at a little cafe serving Polish home style food. There were blintzes and pierogie, chemslach. I rarely take photos of food, but for me, this was home on a plate, the food and aromas of my mother's kitchen, the kitchen I wasn't allowed to enter when she was cooking, "your job is to study, mine is to cook". I'm sorry that I listened.

Later that day, we visited the town of Jadow and found the address where my mother's parents found refuge after they fled Wyzskow as it was invaded by the Germans...ultimately being transferred to Treblinka and their deaths- at the ages of 65 and 67.

Today, Poland is complex and confusing...celebrating a Jewish culture and a Jewish community that no longer exists; a culture and a community they helped destroy. I think of Krakow with its almost Disney-like approach to Jewish history. Souvenir stands sell Jewish memorabilia, trolleys take tourists to the Jewish cemetery; signs invite you to eat in restaurants offering "Jewish food- hamantaschen and matza brie all year long"!

Every so often, walking down a sunny street (yes, the sun shines in Poland-contrary to my childhood belief that all is black and white and rainy) or sitting at a lovely cafe on a bright square, we'd catch ourselves smiling...and stop. Embarrassed- as if we were caught laughing at a funeral.

The ghosts surround us - and embrace us in Poland—-

and they are, I hope, at peace. Like the pear tree in front of the house in Wyzskow, the Gruszka tree has kept on bearing fruit. Two weeks after our visit to Poland, the entire family met We met in Buenos Aires...so that all the youngest members of the Gruszka family tree could meet one another and play together —- and celebrate the ghosts. 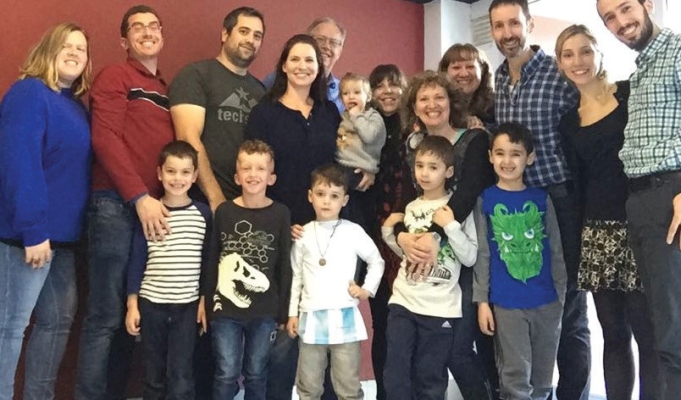